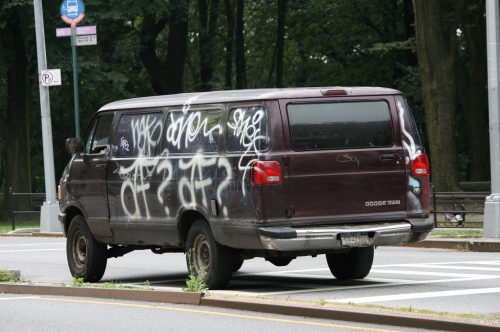 THIS VAN TELLS THE WORLD: I’m all city. See that graffiti on the side of me? That’s art, man.

Driving around Manhattan, I come across all sorts of insane sights. Like,

for instance, I’m driving up Riverside the other day and I come across this girl—>

Is she wearing pants? Who knows? It’s New York, man. Anything can happen.

So I got a little spray paint on my exterior. No big deal. Underneath the hood of this late-90s model Dodge, I’m rockin’ a V8. And that’s nothing to shake a stick shift at.

do not mourn his death. celebrate his “whiiiiirrrre”

The birth of “sketchyvan.com: exposing the american dream one van at a time” will start with a death. In honor of Gary, a legendary Chevrolet Blazer that lived and breathed the sketchyvan ethos, we present his obituary, printed here. And only here.

Gary, may your tank always be full, your air filter always unclogged, and your muffler always tied up with a golden coat hanger.

Gary the Light Blue Blazer took his final lap around the block on Wednesday, 9/9/09. He was 15 years old.

Known to his legions of followers simply as “Gary,” the 1994 Chevrolet Blazer with a V6 engine was purchased by its current owner, Buddy McCarthy, in on a late summer afternoon in 2004. His pricetag of $2,000 belied the personality and doggedness that lurked under the hood.

Gary would go on to take two coast-to-coast trips, including an epic “bar crawl across America” that lasted 8 days and spanned 16 states (at the end of the trip, in Portland, OR, he was mysteriously crap-bombed by a pair of poop-saturated boxers). Gary spent a year in the Rocky Mountains of Colorado before relocating to Brooklyn, NY, where he lived out his remaining years.

“It’s better this way, that he goes peacefully,” said a frequent Gary passenger as the the baby blue truck was hauled away behind a flat-bed tow truck this morning. “It’s just a shame that he had to die today. He had such a great parking spot – that one’s, like, impossible to get.”

Part of Gary’s mystique was his uncanny ability to leave his passengers stranded. Whether it was a broken thermostat in Craig, CO, or a dead transmission directly in the middle of the Tappen Zee bridge, Gary liked to keep his driver guessing. For years, he had a habit of going “whhhhhiiirrrrrrre” unexpectedly while cruising down the highway and subsequently losing power – once the driver pulled over and let him rest a second, he would drive normally again.

A collection of novelty “GARY” license plates dangled from his passenger seat, and was given to his owner at the time of his passing. The Blazer emblem was also removed for posterity.

In lieu of flowers, Gary’s owner has requested that mourners donate jumper cables to other ’94 Blazer owners.

Gary is towed from his final parking spot in Brooklyn, NY. And it was such a great parking spot.